The Sanskrit word Upanayanam is made of Upa and Nayanam. (vision through knowledge). Literally, it is identified as the second vision known as Wisdom & knowledge. Also, Dwijan as we call the boy to whom the ceremony is being performed, is known to get the second birth - first being born on the earth with physical body and second being "taking one near to wisdom". through this ceremony. Essentially it has two parts. First is the investiture of the three stranded thread called Yagjnopaveetham. The second part is the Brahmmobadesam - taking one to the Brahmman - a recitation into his right ear the Gayathri mantra. This is usually performed by his father, who becomes the Teacher known as Guru to the boy.

The Youngster is thus, made eligible to be taken near the Vedas, so that he can study them and practice what is ordained upon him, in the Vedas. Here is the simplest way I explain the ritual known as Upanayanam - Brahmmobadesam. This ritual is performed with a larger gathering of friends, family relations and others to bless the boy. And from this day, he begins his routine Sandhya Vandanam - a regular prayer done thrice a day - during Morning, Noon & in the Evening. Also, from the day of Upanayanam & Brahmmobadesam, he start to perfom the Samitha Dhanam, a holy fire sacrifice, which he is supposed to perform daily. 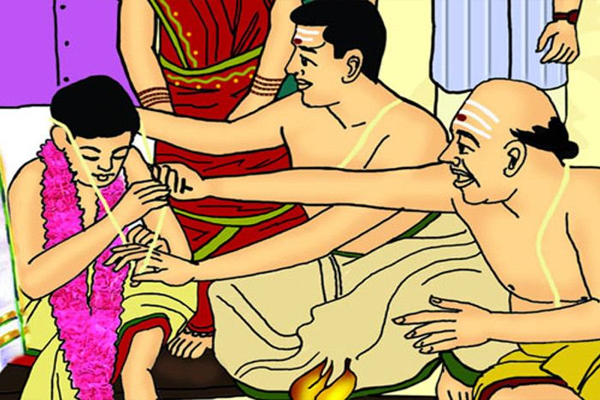 Anugyam
Anugyam is the ceremony where we obtain permission from the gods, our forefathers and the Sabha (the assembly) to proceed with the ceremony.

Ganesh Puja
We then pray to Ganesha who is the "remover of all obstacles.

Sankalpam
We conclude this phase with the Sankalpam, which is a description of what we are supposed to do today.

Punyavachanam
The place and the people performing the ceremony are "purified" spiritually and we get mentally ready for the ceremony.

Choulam - Initial (ceremony to remove hair)
This is a ceremony typically performed in the third year of a child's life. It is an offering of the hair of the child to the gods. If that was not performed, it is done here. The father typically scrapes a few strands of hair with religious chants. Since this is done with the Vedic Mantras, it is considered a part of the religious ceremony and does not require a bath (as is the custom following any hair removal, in the Hindu society).

Yagnopaveetha Dhaaranam
The Bramhachaari (student) will wear the sacred thread for the first time. The guru instructs him on the proper way to wear the thread so that it hangs from the left shoulder to the right hip.

Kumarabhojanam
This is a "simple" meal that the student shares with others who are already " Bramhachaaris" or students. This symbolizes a pre school orientation with someone familiar with the system at the school the new initiate will be attending. This meal is served on banana leaf. Menu: Idli, Pongal(white), Kesari, Chutney, Sambhar, Karuvadam, Banana.

Choulam – Upanayanam
In preparation for the main part the invocation - the Upanayanam Homam, the young charge has his head shaved partially to indicate his status as a student (Bramhachaari) by a barber. This requires him to take a bath. The student's Maama (maternal uncle) typically carries the child on his shoulder, to the site of the Homam.

Upanayanam Homam
This is the main part of the invocation of the gods - Pradhaana Aahuti, indicating that we are ready for the Bramhopadesam.

Bramhopadesam Anugyam
Obtaining permission from the gods, our forefathers and the Sabha (the assembly) to start the Bramhopadesam.

Bramhopadesam
Under a shroud of silk, the young charge is given the first instruction on the Gayatri Mantra, the holiest of all chants in the Hindu religion, by his father and the guru. After the Bramhopadesam, the student will now take the vows related to the state of Bramhachaarya.

Samidhadhanam
This is the Bramhachaari' s first independent pooja, or religious rite.

Bhikshacharanam
As a student, the Bramhchaari is expected to live on the charity of a designated group of families. The women of the Sabha symbolically gather to give alms to the Bramhachaari as he begs for food by repeating the words " Bhavati Bhiksham Dehi" (please give me alms). This is considered a sacred duty and an honor for the women of the community. The student then offers the food collected to the Guru, who in turn will allot his share to the student. Henceforth, the Bramhachaari is expected to eat only after obtaining permission from his Guru.v

Akshatha Aashirvatham
The community blesses the new Bramhachaari with a showering of rice.

Aaarati
This is the formal conclusion of the religious ceremony.

Loukikam
Literally translated as "Protocol". This is where the student is given some parting gifts by his parents, aunts, uncles and the Sabha.

Maadhyanikam
The Bramhachaari will perfrom his first "daily duty" of meditation. This is to be performed daily, in the morning and evening (called the Sandhyavandanam - prayer at the junction of night and day) and at noon ( Madhyanikam).

Are you planning an intimate gathering or an event? We will work with you step by step, to ensure that catering for your event is a memorable one. Our commitment to your satisfaction is evident from the moment you call until the last guest leaves the party.