Shashti Abda Poorthi (Sanskrit meaning: Sashti = 60, Abda = years, Poorthi = completion) is also known as 'Sashti Poorthi'. It is a Hindu ceremony that is celebrated to commemorate the 60th birthday of a person.It is the turning point in a man's life for at this age one has usually fulfilled his commitments to family and home and so he can turn his mind to spirituality. We can say that, the period before he reached sixty is defined by materialistic pursuits and thereafter it is to be defined by his strive towards spiritualism.

Meaningful and elaborate rituals have been included to mark this milestone in a person's life. Some of the wedding rituals are performed. Some call this ceremony as Ugra Ratha Shanthi, which literally means appeasement of harsh times. The couple seek the blessings of elders who have themselves completed their Shashti Abda Poorthi and in turn bless the ones who are younger to 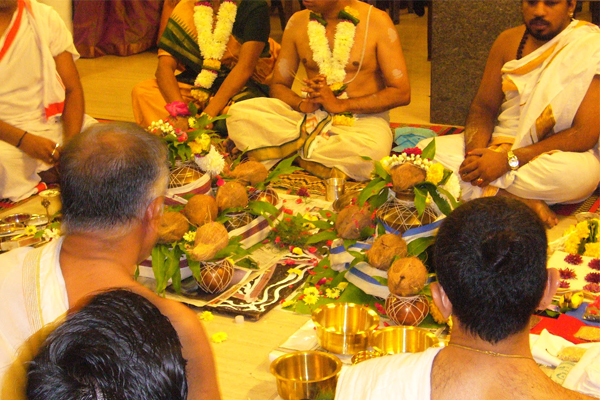 As per the above-mentioned mantra, Sashti Abda Poorthi could be conducted in the year, month and the day a person completes 60 years of age. If this is not possible then an auspicious day as per the person's birth chart is fixed during the year before the completion of sixty years. Usually, Sashti poorthi is celebrated at the completion of the 60th year and the ushering in of the 61st year.

Even before commencing the ceremony, the morning rituals like bath and sandhya vandhanam are carried out to purify the body. Vedic Pundits will now give permission to start the rituals, this is referred to as 'ANUKJNA'.

Ganapathi Pooja is done as in all the Hindu rituals.

Sankalpam The couple prays to the almighty to grant them a healthy and contented life. They also seek blessings from God to free from the sins committed and bad effects of forthcoming planetary periods.

Graha Preethi Dhana and Vaishna Sradham are conducted at this stage.

Punyaham is done so as to sanctify the venue. It is also symbolic of purifying one's body and mind.

Repetition of Wedding Rituals In the ceremony, the couple who is celebrating the ritual repeats their marriage vows; they perform the wedding rituals like malai marral (exchange of garlands), Mangalya Dharanam (tying of the mangalyam) and taking Manthra Snanam with the water blessed with the udhaka sayana manthras. The Vedas are recited for about four days and discourses on the epic Ramayana are conducted to remind people of the Vedic way of life.

The Mrityunjayadevata Kalasa Sthapana and Pratima Sthapana form an essential part, while archanas are also performed.

The procedure for Kalasa Sthapanam varies from place to place, the main difference being in the number of kalashas used, it can be 60, 33 or 12. After Kalasa Sthapana, Shodasa Upachara Pooja is performed with the chanting of Vedic mantras in order to invoke the deities.

Chanting of various Vedic mantras including Varuna Sookhtha, Purusha Sooktha, Nakshatra Sookhta and Dik Palaka Mantras are done and concluding with the performance of Dosha Shaanthi.

Homas : The following are the set of Homas that a Sashti poorthi ritual must include.

1. Ayush Homam : During the Homa, Thrayambaka Mantras will be chanted by 108 Ahuthees. The first of the Homa that are performed during Sashti poorthi is the 'Ayush Homam'. This Homam is done to pay homage to Ayur Devatha who blesses people with a long life. A coconut, betel leaves, fruits, ghee, and milk sweets are required for this Homa and is performed before a Ganesha yantra.

2. Navagraha Homa: A fire ritual for pleasing the nine planets that rule and define the fruits of one's karma, so that they may be favourable to one's spiritual pursuits that one is expected to seek after he turns sixty.

3. Dhanvanthri Homa: to invoke the blessings of Dhanvanthri, the God of medicine. He is depicted as having medicinal herbs in one hand, and a pot containing nectar in the other. When this Homam is performed, it spreads positive energies and good will. It has the powers to clear ill health.

4. Maha Mruthyunjaya Homa: Lord Shiva is invoked as Mahakaal the primal force that has conquered the time and hence 'the death'. This particular Homam is done for longevity. 21 mantras are chanted and the special offering here are Durva grass, an herb called Amrita, Banyan twigs, sesame seeds, cow's milk, sweets and twigs from the Chamita tree.

This homa is concluded with Jayaathi Homa. Then Puna pooja is performed which is followed by the ritual in which Kalasa Jala is spread on the Kartha and all those present at the occasion. Aajya Nireeshanam or Chaya Dhanam is performed next.

After this, Mangala Snana has to be conducted on the couple using eleven dravays, which are Gorochanam, Curd, Ghee, Durva grass, Cow's Milk, Fruits, Flowers, Mirror, Deepam, Mud, Gold.

This ritual is done to get long life, health, courage, wealth, knowledge and beauty.

Mangal Snana is followed by the Kalasha Abhisekha on the couple by the rituals and elderly scholarly people. The cloth used in this ceremony is then given to purohits in charity.

The ceremony of Shashtiabthapoorthi would be incomplete without the "Dhanam" or charity. Various Dhana are performed by the couple for blessings and prosperity. The Dasa Dhana - the term dasa refers to "ten" and Dasa Dhana is the collective term for ten different types of offerings which are:

Cow has always been sacred to the Hindus and Gho Dhana or Cow Dhana is sure to bring about good fortune and peaceful life. The Dhana is given to Vedic experts by the couple. As per the rules, substitution of the cow by Go Moolya and Coconut also yields the same results. Go Moolya means price of the cow.

believed to bestow superior powers to the giver and also free from all the sins committed by him.

3. Bhoo Dhana or Land in Charity

The concept behind Bhoo Dhana is that giving land to cultivate would bestow the giver with an opportunity to lead a comfortable life. The ritual is assumed to be complete with the offering of a sandal wood piece (substitution to land).

4. Vasthra Dhana or Cloth in Charity:

As the name indicates, this ritual includes giving of a cloth, which mostly is veshti or uthareeyam. This ritual is very important as it brings prosperity and harmony in life.

5. Jaggery in charity or Jaggery Dhana:

is being conducted to appease Goddess Lakshmi who will bless the giver with opulence.

6. Lavana Dhana or Salt in Charity: is carried out to please Lord Sri Rudra to gain good health.

7. Food Dhana or Food Grains in Charity: Offering food grains such as rice, paddy etc will help the giver to lead a prosperous life.

8. Silver Dhana or Silver in Charity: is performed to appease pithrus (ancestors) or Lord Vishnu.

9. Ghee Dhana: will be carried out by offering ghee in a bronze carrier to please all Devathas. Ghee Dhana redeems the giver from all the bad karmas (sins) and purifies his soul.

10. Sesame Dhana: Like Ghee Dhana, Sesame when offered in an Iron or Copper vessel helps the giver to get rid of all the sins.

Panch Dhana Besides Dasa dhana, some people do a Panch Dhana as well, which includes offering of a religious book, Vastram, Deepam (Lamp), Udhaka Kumba (water taken in Copper or Brass Vessel), Bell.

Performing the Panch Dhana with the Dasa Dhana will appease all purohits and Devathas who will in turn, provide their blessings for a prosperous and happy life.

There is a very important Dhana performed in the Shashti Abda Poorthi ceremony, and is usually performed after all the rituals are completed and the couple gives Phala or fruit to all those who have been part of the rituals.

The last ritual is the Maha Aashirvaadam followed by Brahmana Bhojanam and Swasthi Vachanam.

Are you planning an intimate gathering or an event? We will work with you step by step, to ensure that catering for your event is a memorable one. Our commitment to your satisfaction is evident from the moment you call until the last guest leaves the party.